The House of Representatives Ad hoc Committee investigating alleged 17 billion dollars stolen undeclared oil proceed has summoned Mr Ibrahim Magu, acting Chairman of Economic and Financial Crimes Commission (EFCC), to appear before it on Tuesday.
The Chairman of the committee, Rep. Abdulrazak Namdas, summoned Magu on Monday in Abuja at the opening of the investigation where all the invited stakeholders sent their subordinates to represent the committee.
The committee has commenced investigation into alleged 17 billion dollars stolen from undeclared crude oil and liquefied natural gas exports to global destinations.
Also summoned by the ad hoc committee to appear before it were the Group Managing Director of the Nigerian National Petroleum Corporation (NNPC), Dr Maikanti Baru; and Central Bank of Nigeria (CBN) governor, Mr Godwin Emefiele.
Others were Director-General of Nigerian Maritime Administration and Safety Agency (NIMASA), Mr Dakuku Peterside; and Accountant General of the Federation, Mr Ahmed Idris.
The committee also summoned the Group General Manager, National Petroleum Investment Management Services (NAPIMS), Mr Stephen Sejebor; and Director of the Department of Petroleum Resources (DPR), Mr Modecai Ladan, in connection with the stolen fund.
Namdas, who is the spokesman of the House, noted that since the nation lived by oil proceeds, no fight against corruption could be meaningful without serious search-light on the industry.
According to him, this is especially when the perpetrators are high and mighty who inexorably are the models the society look up to.
He warned that the House would not hesitate to invoke its constitutional powers to compel the invited chief executives to appear, if they default.
He therefore turned back directors and other management staff who were sent as representatives of their respective organisations.
Earlier in his welcome remarks, Namdas said that reports had it that over 57 million barrels of crude oil were illegally exported and sold in the U.S. between January 2011 and December 2014.
He said that the estimated revenue loss by the government of Nigeria “is around 12 billion dollars’’.
“At an exchange rate of N196 to a dollar, this translates to over N2 trillion. You could imagine what the value is now”.
According to him, the corruption in the oil industry distorts public policy, creates misappropriation and misapplication of resources.
He added that “it vitiates private sector and private sector development and over and above all, it undermines good governance and ultimately hurts the poor most”.
Meanwhile, the Speaker of the House, Mr Yakubu Dogara, had said that the incidence of stolen and missing money at the NNPC and the entire oil industry was now an albatross to the development of the nation.
Dogara, who declared the public hearing open, lamented that if not for the constant theft in the oil industry, the nation would not have been in economic recession at the moment.
“The incidence of money missing in the industry has become a recurrent decimal to the point that news items in the media are incomplete without mention of the ills of the industry.
“The reports of the media on the ills in oil industry clearly attest to the concern of the government to tackle corruption in the industry head on”.
The speaker, who was represented by the Minority Whip, Rep. Yakubu Barde, said that the country had received disturbing audit reports about the oil industry.
He said that the report about the oil industry involving International Oil Companies (IOCs) was that 4.4 billion dollars was trapped somewhere instead of remitting it to the federation account.
He cited a report from an anti-corruption organisation, the Action Network for Economic Justice, in which it claimed that NNPC did not remit over 12 billion dollars to the federation account since 2009. 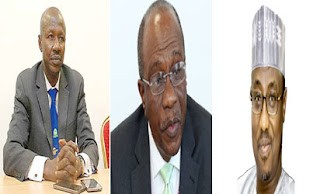 “The same organisation alleged that the sum of 5.9 billion dollars of the federation accounts were lost to offshore processing agreements and through crude theft in the country”.
According to the speaker, “if loss of revenue to the nation through the oil industry was to be avoided, I can beat my chest that under no circumstances should Nigeria be talking about recession.
“Therefore, no amount of investigation in the oil industry can be said to be an over kill as the oil industry has become endemic.
“The investigation of the 17billion dollars therefore remains part of the ongoing process in confronting the hydra headed monster”.
He therefore urged the committee to complement government’s efforts in the fight against corruption.